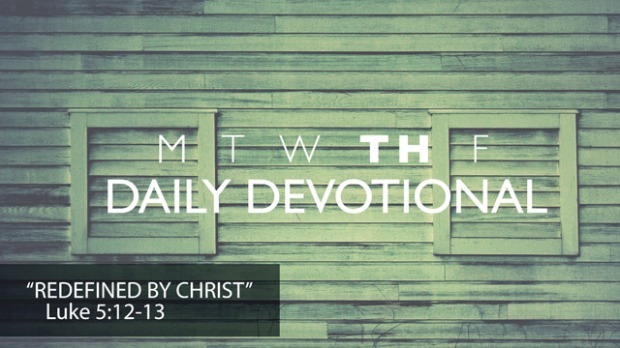 “There was a man covered with leprosy; and when he saw Jesus, he fell on his face and implored Him, saying, ‘Lord, if You are willing, You can make me clean.‘ And He stretched out His hand and touched him, saying, ‘I am willing; be cleansed’” (Luke 5:12-13).

While twenty-four of twenty-five personalities in the gospel of Luke thus far have names, this man is identified by the weakest and worst moment of his life. It is a terrible thing we do as human kind; to freeze people in time, defining them by their worst moments or biggest mistakes. In contrast, it is the most wondrous thing of God’s redeeming grace; that he redefines us in the light of what Christ has done and not what we have done.

This entry was posted on September 18, 2014, 6:58 am and is filed under Uncategorized. You can follow any responses to this entry through RSS 2.0. Responses are currently closed, but you can trackback from your own site.