Posted by bobbydagnel in Uncategorized on July 31, 2015

“Now the boy Samuel was ministering to the Lord before Eli. And word from the Lord was rare in those days, visions were infrequent” (1 Samuel 3:1).

While there was certainly no wanting of religious activity in the days of Samuel and Eli, what was lacking was a word from the Lord. The rarity of God’s word has never been an issue of his willingness to communicate but the unwillingness of even God’s people to proclaim and hear it. Instead, exchanging the transcendent for the imminent, we have allowed political rhetoric and the parroting of public vitriol to occupy the spaces intended for the exclusive dwelling of God’s word — his church and the hearts of his people. The greater rarity is to find those that recognize the difference.

A LIFE OF WORTH

Posted by bobbydagnel in Uncategorized on July 30, 2015

The verdict of worthlessness imposed upon Hophni and Phineas is the result of their total disregard for the things of God. That “they did not know the Lord” wasn’t an issue of knowledge but, rather, they gave no thought to God whatsoever. Theirs was a willful disobedience to and utter contempt for the responsibilities God’s word set before them. Their failure is our reminder that a life of meaning, worth, and purpose is realized in the continual, daily pursuit of what God is seeking to accomplish in our lives.

Posted by bobbydagnel in Uncategorized on July 29, 2015 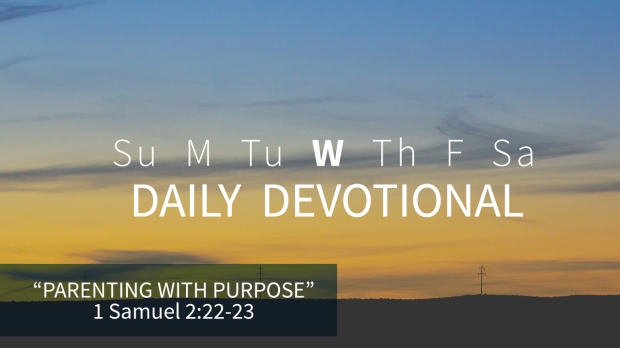 “Now Eli was very old; and he heard all that his sons were doing to all Israel, and how they lay with women who served at the doorway of the tent of meeting. He said to them, ‘Why do you do such things, the evil things that I hear from the people” (1 Samuel 2:22-23).

As free-will moral beings, our children will, ultimately, decide for themselves whether or not they will obediently live the life of faith. Even so the responsibility of a parent is to provide an atmosphere conducive to the nurturing of faith in the formative years of a child’s life. While Eli was a personal success, and professionally accomplished, he was a domestic failure. The inconsistency of his discipline, while indulging the bad behavior of his sons, and his refusal to listen to what others were saying resulted in grown sons that scripture refers to as “worthless men” (v.12). To give any child a fighting chance requires parenting with purpose.

Posted by bobbydagnel in Uncategorized on July 28, 2015 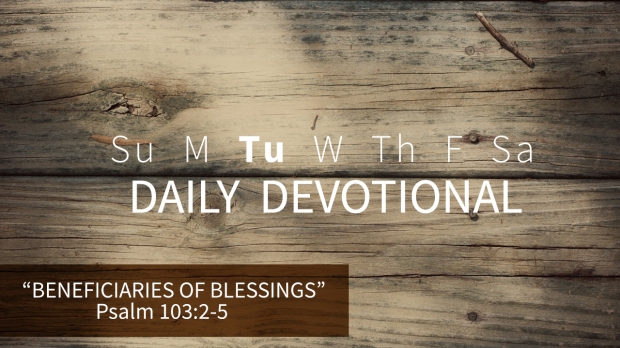 The capacity of our praise and blessing is dictated by the degree of thanksgiving and gratitude that dwells in our hearts. The list of benefits noted by the psalmist is by no means exhaustive but, rather, emerges from what he has learned and experienced living in relationship with the Father. As a beneficiary being summoned to bless and praise God, and based upon your relationship with Him, what would you add to this cataloging of benefits?

Posted by bobbydagnel in Uncategorized on July 27, 2015

Because they have become such a familiar chorus, we fail to recognize the oddness of these words. It is the psalmist summoning himself to praise. When the natural tendency is to count our burdens on calculators and blessings on our fingertips, the challenge set before us is to practice with supernatural intentionality the discipline of blessing and praising God. It is a mark in our faith development when the shift is made from being only a consumer of blessings to a contributor of blessings.

Posted by bobbydagnel in Uncategorized on July 26, 2015

“But the fruit of the Spirit is love, joy, peace, patience, kindness, goodness, faithfulness, gentleness, self-control; against such things there is no law” (Galatians 5:22-23).

Christianity and religion should “look” different. Religion is man reaching out to god to gain his favor. Christianity is God reaching out to man through his son, Jesus Christ. Religion is works-based. Christianity is rooted in grace. Granted, Christianity wrongly understood and practiced can look much like religion — when the prevailing spirit is one of self-love, hate, terror, intolerance, insensitivity, anger, and meanness, all of which are driven by a sense of self-righteousness. These stand in stark contrast to the fruit of the Spirit described by the apostle Paul. A zeal for our faith is a must, but it must be a zealousness for the life of faith described in scripture and depicted in the life of Jesus, or else it just looks like another religion.

Be a fruitful believer not a religious nut.

Posted by bobbydagnel in Uncategorized on July 25, 2015

The first disciples could not have imagined any possible advantage in the idea of Jesus “going away.” Through the prism of their experience and limited understanding, fulfillment of the mission, ministry, objectives, and expectations of the Messianic Kingdom, rested upon but one person; his personality; his energy, and wherewithal — Jesus. Yet, his “going away” brought even greater possibilities. The person of the Holy Spirit and his abiding presence would mean not only a constant mindfulness of the purposes of God but, now, the power by which they can actually be accomplished in our lives. Thus, as His purposes are being fulfilled through the many who call him Lord and Savior, the Kingdom of God is being realized exponentially. His going away was for our advantage but also His as His body, the church, has grown to even greater proportions.

Posted by bobbydagnel in Uncategorized on July 24, 2015

“For the Lord is good; His lovingkindness is everlasting and His faithfulness to all generations” (Psalm 100:5).

Reflecting upon the character of God, his enduring expressions of love, and his unfailing loyalty to past, present, and future generations, how could the psalmist not be brought to a place of praise? Like the psalmist, we, too, must say these things aloud, incessantly and unceasingly, if they are to become the joyful realities of our hearts and the convictions of our praise.

Posted by bobbydagnel in Uncategorized on July 23, 2015

“Know that the Lord Himself is God; It is He who has made us, and not we ourselves; we are His people and the sheep of His pasture” (Psalm 100:3).

For a culture such as ours, that breeds narcissistic preoccupation and fascination with one’s self, the words of the psalmist are a timely reminder that in matters of praise and worship, God is the object of our adoration. The corporate gathering of God’s people is not a private altar to draw attention to the individual worshiper, but a sacred altar where we, together, express ourselves in a way that draws attention to the One we worship.

Posted by bobbydagnel in Uncategorized on July 22, 2015

“Serve the Lord with gladness; come before Him with joyful singing” (Psalm 100:2).

There is an inseparable kinship between service and joyful worship. When we fail to live life as a service to the Lord, worship becomes rote, ritualistic, void of meaning, and eventually sporadic, if not absent. When faith is engaging; when it seeks to be the presence of Christ in all places; when it participates in congregational life, worship becomes vital, vibrant, and anticipatory. Are you serving gladly or begrudgingly? Your answer is reflected in the song you sing.