Posted by bobbydagnel in Uncategorized on May 31, 2017

While asking Peter three times if he loved him might have been a painful reminder of his three-fold denial, I believe the Lord was seeking not to be hurtful but was, instead, doing something very pastoral, theological, and psychological. Instead of Peter being continually haunted by his past failure, and the thrice-stated denial, “I don’t know the man,” Jesus’ greater concern is for the future role of Peter in the life of the church and God’s redemptive purposes for the world. It is a work done on the backs of those who continually fail, but are driven forward none the less by the truth etched into their mind — “You know that I love you, Lord.”

Posted by bobbydagnel in Uncategorized on May 30, 2017

“Then He said to Thomas, ‘Reach here with your finger, and see My hands; and reach here your hand and put it into My side; and do not be unbelieving, but believing’” (John 20:27).

Being that humankind is the thinking part of God’s creation, we should not hold Thomas in low regard for his skepticism. He simply expressed what we all want to know — “Did the resurrection really happen?” Even so, only the most simple-minded limit belief to what can be touched, observed, measured, and understood. Thomas’ criteria for his belief, however, has provided us an invaluable benefit — another piece of evidence to move us from unbelief to belief.

Posted by bobbydagnel in Uncategorized on May 29, 2017

Though Thomas had been absent, the other disciples were doing the very thing we would expect from witnesses of the resurrection — telling others the good news. Those who really believe it have no difficulty in communicating it. We are followers of Christ only because someone told us. We are part of a rich apostolic heritage. The telling of good news did rest upon the eleven disciples and all of us to this day. Our vibrancy and perpetuation as the people of God has long resided in the telling our story (Deuteronomy 6:6-8,20-24).

Posted by bobbydagnel in Uncategorized on May 28, 2017

“These things I have written to you who believe in the name of the Son of God, so that you may know that you have eternal life” (1 John 5:13).

Knowing breeds a quiet confidence; a steely resolve; a fixed conviction. Not knowing brings uncertainty, fear, hesitation, second-guessing. Knowing that until our doubts are resolved there will be no joy in our faith or boldness in our witness, God’s word offers the assurance we need to know that we have eternal life.

Posted by bobbydagnel in Uncategorized on May 27, 2017

“’Zaccheus, hurry and come down, for today I must stay at your house.’ And he hurried and came down and received Him gladly. When they saw it, they all began to grumble, saying, ‘He has gone to be the guest of a man who is a sinner’” (Luke 19:5-7).

Even to a tax-man like Zaccheus, hated and despised by his countrymen, Jesus extended his salvation of grace and mercy. It is another affirmation of the inclusive nature of God’s redemptive purposes; that God’s loving offer of eternal life is to all people, from all walks of life. Sadly, while Zaccheus is described in verse 3 as being small in stature, he isn’t the only small person in the story. The small-minded are those who seek to make salvation into something exclusive; something for those who are religious; deserving. By their own exclusiveness they exclude themselves. When you think of grace, think big.

THE PRIMACY OF COMMUNITY

Posted by bobbydagnel in Uncategorized on May 26, 2017

“After eight days His disciples were again inside, and Thomas with them. Jesus came, the doors having been shut, and stood in their midst and said, ‘Peace be with you’” (John 20:26).

If the post-resurrection appearances of Jesus to his disciples teach us anything, it’s don’t be late to church. Failing to be where he should have been the previous Sunday, gathered with the other disciples, Thomas missed out on what was, for the other disciples, a significant event in their faith development. It’s no mistake that Jesus revealed himself in the community of his disciples (v.19) on successive Sundays. Christianity would not be a privatized, individualized, mystical religion, but rather, it is the word becoming flesh and dwelling among us. It’s only in the rhythmic gathering of the community of believers that faith and understanding grows.

Posted by bobbydagnel in Uncategorized on May 25, 2017 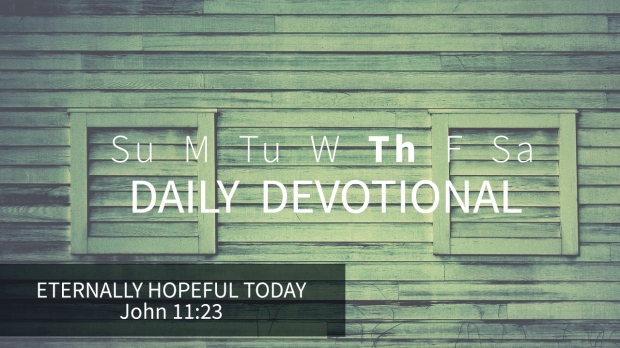 Hope was never intended to be a theological ideal; fodder for lofty sermons and bible studies; removed from the rhetoric of every day life. The hope to which we cling as believers is eternal only as it gets us faithfully through the pain and hardship of this day. A hope that sits only upon the distant horizon of a life that is to come isn’t really hopeful. The eternally hopeful have hope right now.

Posted by bobbydagnel in Uncategorized on May 24, 2017 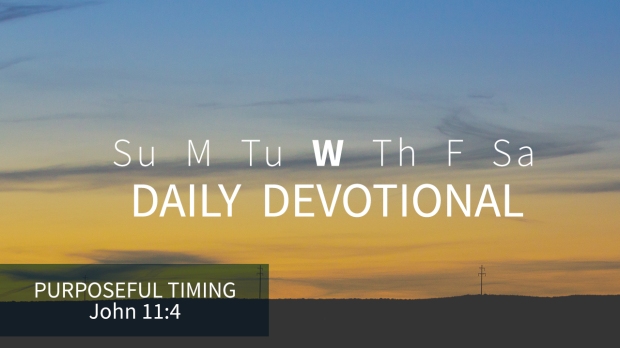 “But when Jesus heard this, He said, ‘This sickness is not to end in death, but for the glory of God, so that the Son of God may be glorified by it’” (John 11:4).

Through their seasons of pain, suffering, grief, and all other expressions of brokenness, the faithfulness of God’s people produces not a catastrophic end, but rather, it fulfills the greatest purpose of all — the glorification of God’s son. Until our lives are purposed for this task, we are forever destined to a life frustrated by the present circumstances.

Posted by bobbydagnel in Uncategorized on May 23, 2017

“Therefore, when Mary came where Jesus was, she saw Him, and fell at His feet, saying to Him, ‘Lord, if You had been here, my brother would not have died’” (John 11:32).

From our perspective, God’s timing is sometimes troubling. In fact, there are times of suffering and injustice in this world where God’s apparent lack of action just looks bad. The created order is so broken that even the friends and loved ones of Jesus are not exempt from illness and physical death. Even so, present circumstances are never the criteria for measuring the love and concern of God. Yes, God’s timing may be painful, but it will always be perfect.

THE PHYSICS OF FAITH

Posted by bobbydagnel in Uncategorized on May 22, 2017

“The mind of the prudent acquires knowledge, and the ear of the wise seeks knowledge” (Proverbs 18:15).

Faith is a dynamic requiring the energy of pursuit. It exists only in a state of forward motion. Otherwise, it is dead. An American theoretical theorist, the late John Archibald Wheeler, once said, “As the island of our knowledge grows, so does the shoreline of our ignorance.” What is true of science is equally true in matters of faith; the more we come to know and understand, the more we realize how little we know and how much more remains to be experienced and understood. Motion does not exist without energy. Keep leaning forward in faith.